David Geater is a Korean War veteran who had the opportunity to travel to Washington D.C. in late September thanks to the non-profit organization Honor Flight.

His journey to visit the war memorials of the nation’s capital was made all the more special thanks to the contributions of students in Lisa Carver’s class at Edison Elementary School.

Geater’s escort to Washington D.C. was Jim Gibson, father of a student in Carver’s class. To commemorate Geater's trip, the entire class worked together to write letters to Geater thanking him for his service.

Geater was truly moved by the letters he received, which made the experience of travelling to Washington D.C. even more special.

“They are all deeply appreciated and will have added greatly to this Honor Flight,” Geater wrote in a letter to Gibson.

Honor Flight is a non-profit organization which seeks to honor veterans for their service and sacrifices. Veterans are provided with free flights to Washington D.C. to visit their respective war memorials. Without the efforts of this organization, many veterans will never have had the opportunity to seek closure by visiting the nation’s war memorials and paying respects to their fallen comrades and friends.

Geater was grateful to Gibson for escorting him during the trip and to Carver’s class for taking the time to write the letters. The trip was organized by the Buffalo Niagara Honor Flight and was the fourth organized by the chapter. 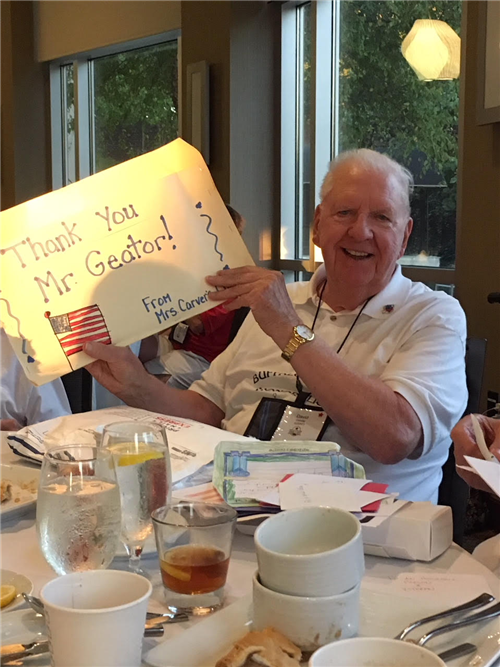