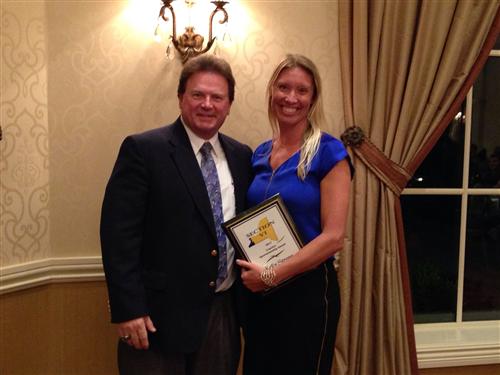 Coach Strong and Section VI President Al Gens
Kenmore West High School Girls Varsity Volleyball coach Kelly Strong was recognized by Section VI for her commitment to coaching with the ideals of sportsmanship always as one of her pillars.
The Recognition Awards Dinner was held Wednesday, August 30 at the Columns Banquet Facility in Elma.
Coach Strong has been coaching girl’s volleyball at Kenmore West since 1999. She has been head varsity coach since the 2003 competitive season. Her match record within the Niagara Frontier League (NFL) is 137-58, a winning rate off 70 percent. Since 2003 the Lady Blue Devils have captured five league championships, the last in 2015.

Kelly has been teaching physical education at Lindbergh Elementary School in the Ken-Ton Schools since 2000. She was selected as the Kenmore West Coach of the Year in 2004. She has served on various curriculum and wellness committees in her career and has been a dedicated professional throughout her time.