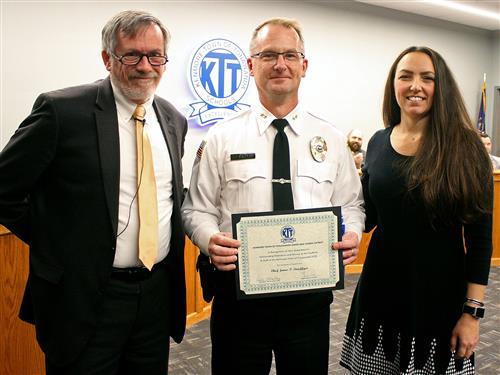 Chief James Stauffiger is a product of the Ken-Ton School District. He was a Ken-Ton student from grades K-12 and graduated from Kenmore West Senior High School. He served as a Sergeant in the U.S. Marine Corps from 1988-1994 as a Cartographer, Terrain Analyst, and Geographic Intelligence Specialist with two sea service deployments to the Mediterranean Sea in 1990 and Persian Gulf in 1991 for Operation Desert Storm. Once being sworn in, one of Chief Stauffiger's top priorities is to establish a strong relationship with the Ken-Ton School District. It is his desire to have a collaborative partnership with the administration and an open friendship with the students. The Chief has accepted invitations to participate in school events such as the Hoover Elementary Read with a Hero Veterans Celebration. He has also assisted a Ben Franklin student with her black belt project to collect donations for Compass House by placing a donation box in the Police Department lobby. Chief Stauffiger has an even larger vision for the Police Department’s role within Ken-Ton Schools that involves, among other things, expanding the Truancy and School Liaison Officer programs.