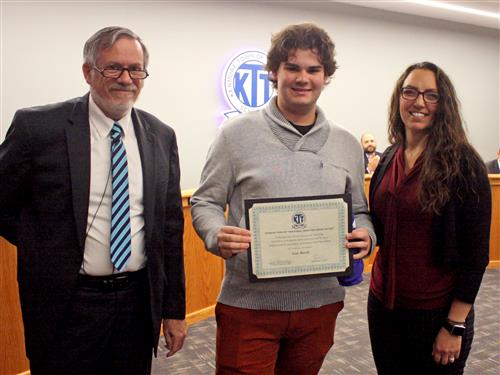 Evan Haieck is an outstanding young man who embraces learning with passion, particularly language learning - he is currently enrolled in French and Spanish C2 Honors, and he is a member of the Spanish and French clubs at Kenmore East. He has hosted two students from Spain last year and he is going to host a student from France this year and travel there as part of the exchange program. He furthermore plans on studying abroad after he graduates from Kenmore East. He has served on the district technology committee as a student liaison, and he is a member of Kenmore East’s LINK CREW. He has also founded a club called the Sustainable Earth Solutions Club, and he has a passion for the environment. Evan is a high achiever - he received the WNY Foreign Language Educators Council Star Award for Spanish, the Kenmore East French and Spanish awards; he was ranked 5th in Western NY for the National French Contest; he has been the recipient of the Beacon Award, as well as for receiving the Excellence in Social Studies Award. He is inquisitive, and he shows a great amount of integrity. As his counselor John Vogt puts it, Even is a gentleman and a gentle man.