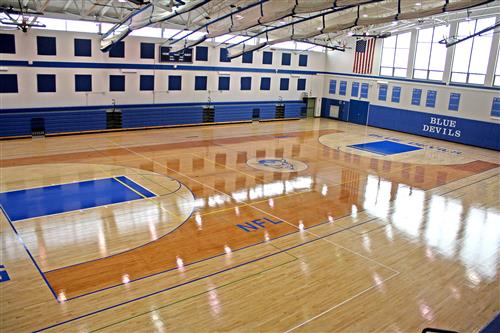 If you’ve stepped into the Kenmore West High School main gymnasium since the start of the 2019-20 school year on the first day of school in September, you may have noticed the 20-year-old gym floor looking brand new, like the day it opened in 1999.

You’re not imagining things. During the summer, a partnership between the Ken-Ton Athletics Department, Kenmore West High School, and the Ken-Ton School District Buildings and Grounds Department, working in conjunction with several local businesses, resulted in the very first redesign and significant reworking of the gymnasium floor since the facility was completed in 1999.

“Thank you to everyone that supported this project,” said Brett Banker, Ken-Ton School District Athletic Director Brett Banker. “First redesign and re-stain since we opened in 1999. Fantastic.”

This year marked the 20th year since the construction of the “new” Kenmore West High School main gymnasium, which was completed in 1999.

Through the years, the hardwood flooring had been maintained on a regular basis through the hard and dedicated work of the Ken-Ton School District custodial staff, which included the screening of the wood surface each year and applying a new coat of gym seal. The sealer that was used over the years was an oil-based finish that, over time, has developed a yellowish haze to the surface which caused the painted lines and graphics to discolor.

“The hardwood surface itself is in great shape with no cupping or water damage, so no repairs to the flooring was needed,” said Tim Ames, Ken-Ton School District Director of Facilities, “but the fading, yellowish tint needed upgrading, and the only way to accomplish this is by sanding off the sealer and existing painted lines and graphics.”

That would be a tremendous undertaking. Discussions on potentially sanding, repainting, and resealing the gymnasium floor began two years ago between Banker, Ames, and Kenmore West Principal Dean Johnson. The original idea was to include the work within the district’s upcoming capital project, though that would be two or three years away.

Instead, they decided to talk with a vendor and get some ideas of what the cost and timeline might be for a project like this. And ultimately, the decision was made by the Athletics Department, the Buildings & Grounds Department, and Kenmore West High School to move forward ahead of schedule with minimal cost to the district. 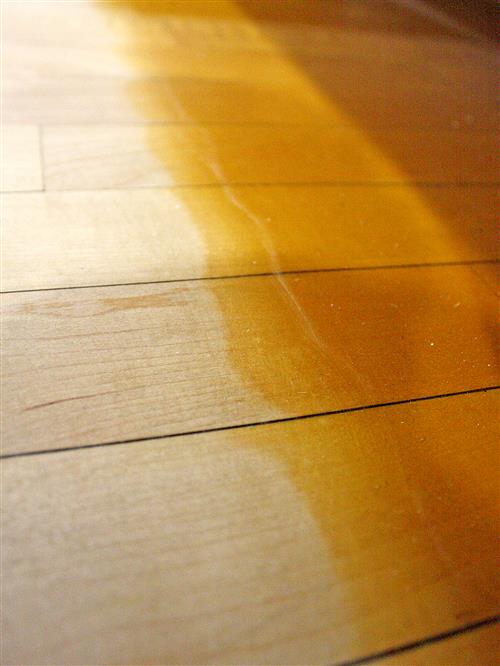 The old appearance of the entire gym floor is still visible in small sections such as under the bleachers, providing a contrast bwteen old and new.

Several local businesses in addition to district Buildings & Grounds staff were involved with the project. Gallivan Brothers Hardwood Floors, a local family-owned business, conducted the work. A decision was made to use a water-based sealer to eliminate the yellowish haze that had been produced over time by the oil-base finish. FM Communications provided the center court stencil of the "Blue Devil,” Sherwin-Williams provided the paint colors, and Hillyard Inc. provided the sealer and finish. 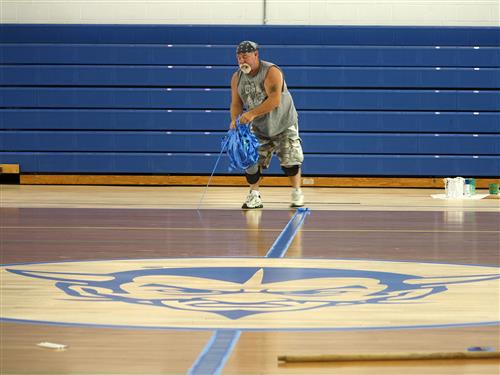 Work began wrapping up toward the end of the summer – a major upgrade to one of the district’s most important athletic and physical education facilities, completed just in time for the start of school.