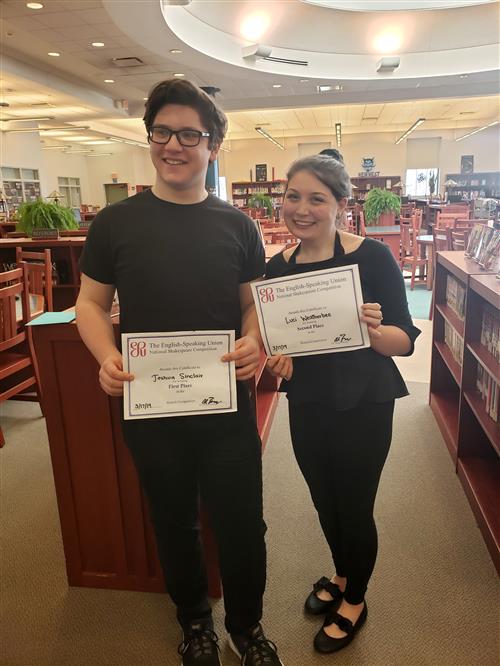 Both the winner and runner-up in the 2019 Regional Shakespeare Competition are Kenmore West High School students.

"They represented Theatre West beautifully," said Kenmore West theater teacher Diana Gruninger. "This is really a tremendous honor. I couldn't be more proud of our kids."

As the first-place winner, Josh has earned an all-expense-paid trip to New York City where he will be performing at Lincoln Center in the national Shakespeare competition against students from around the country. His trip will include educational workshops at Juilliard as well as sightseeing and a Broadway show. And for the second year in a row, as the second-place winner, Luci will be the Regional Alternate for the national competition.

The event was sponsored by the Niagara/Frontier Buffalo branch of the English-Speaking Union of the United States, an organization dedicated to promoting debating and public speaking skills, student exchange, and the effective use of the English language.

The competition encourages students to develop their communication skills and appreciation of the power of language and literature while also supporting educators in their English language arts and Shakespeare instruction and curricula.