Educators, District Leaders Call on NYS to ‘Fund Our Future’ 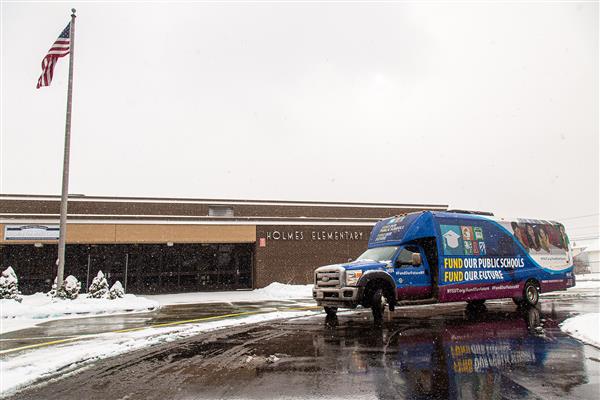 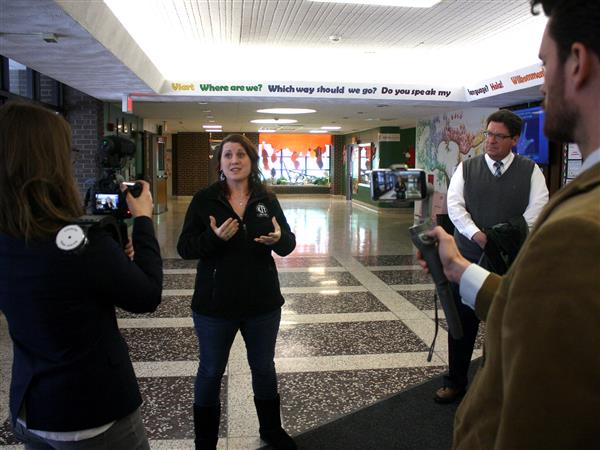 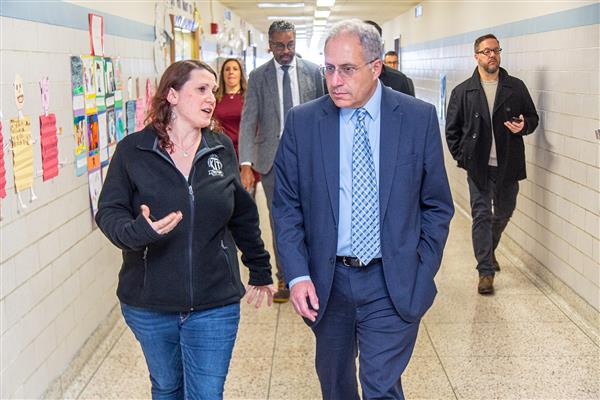 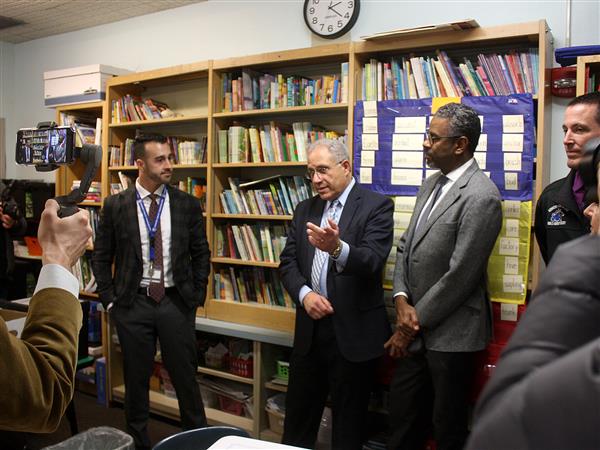 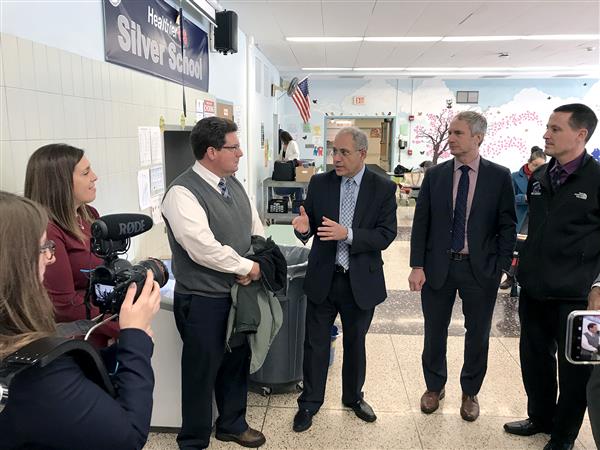 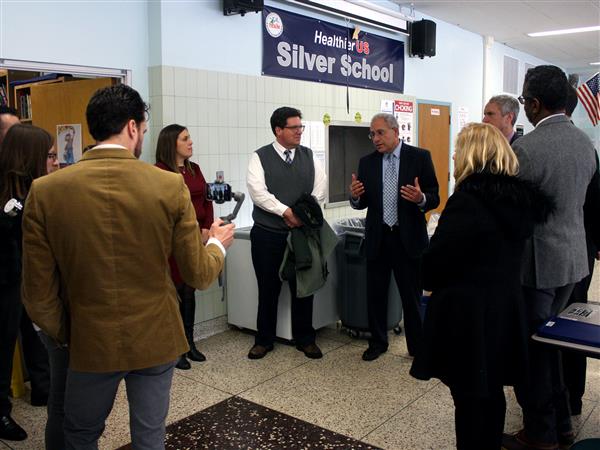 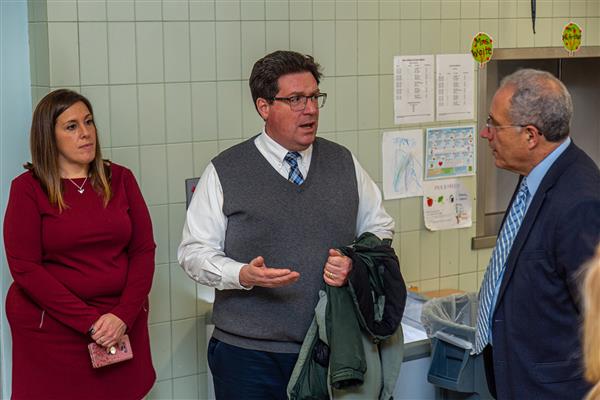 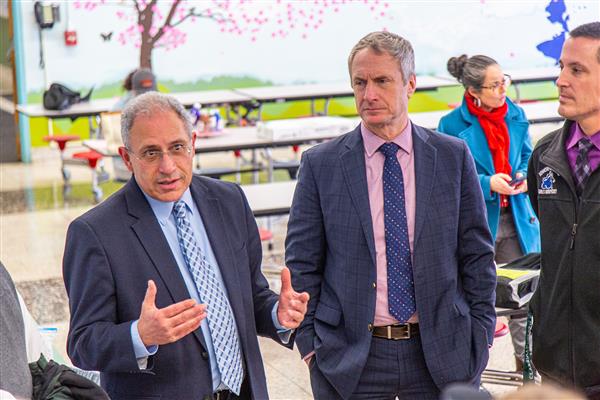 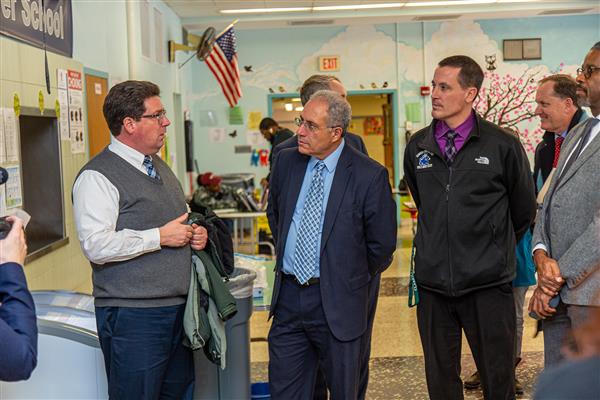 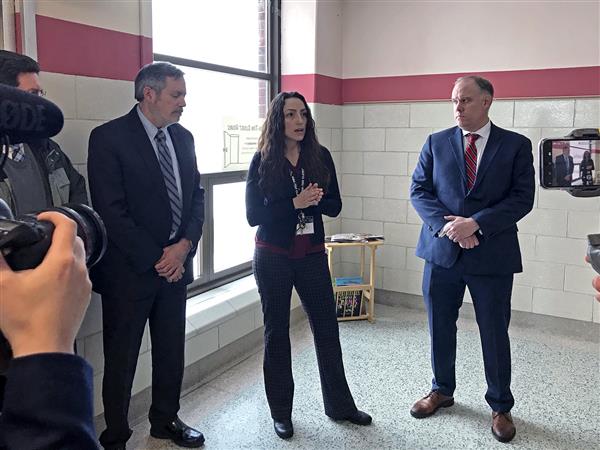 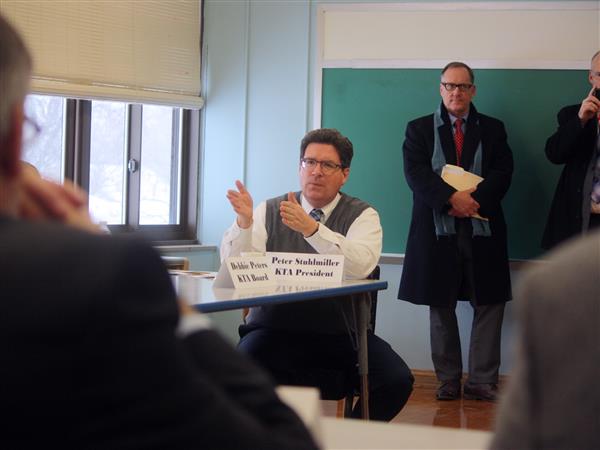 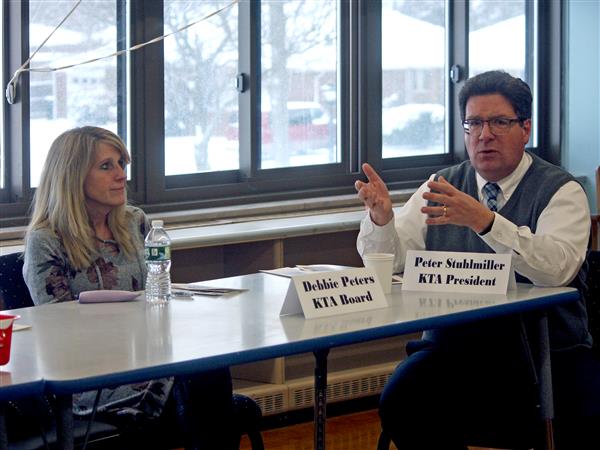 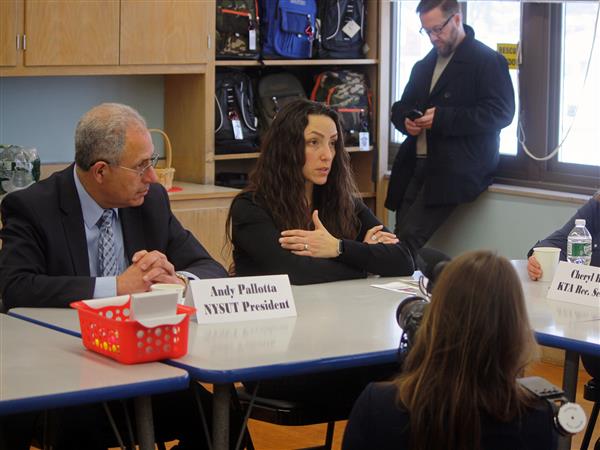 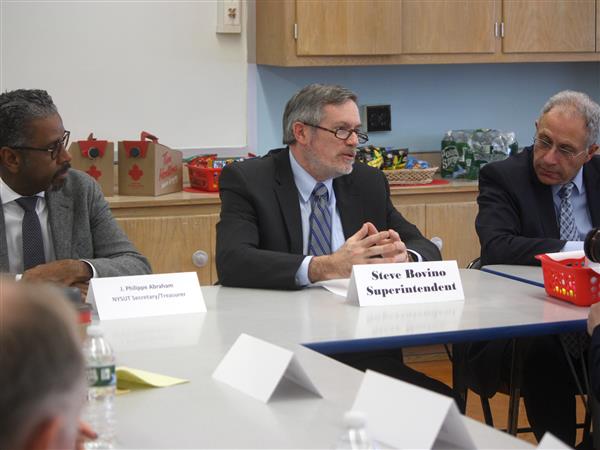 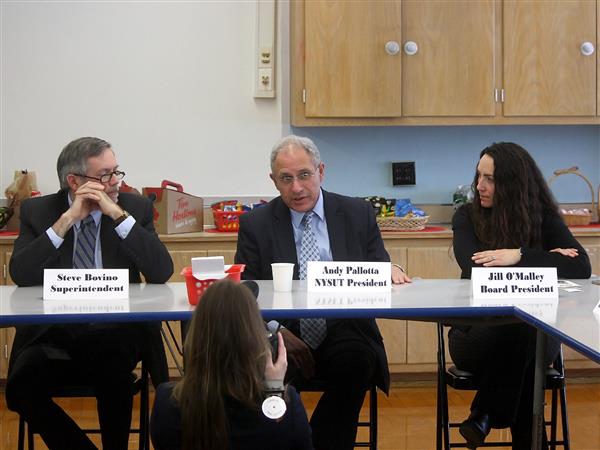 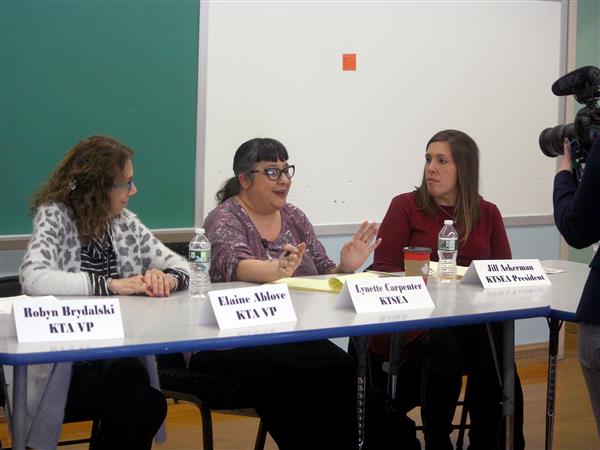 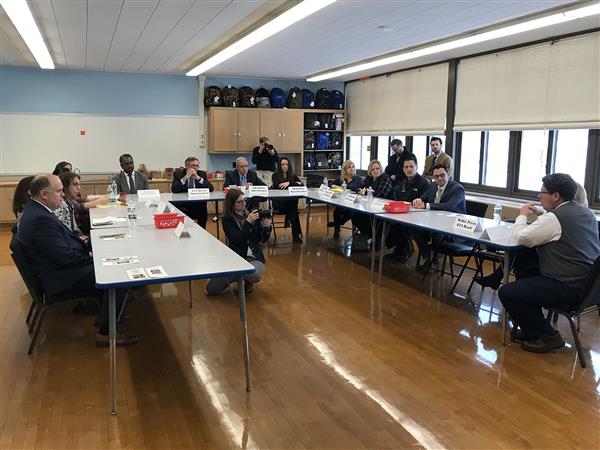 School district educators and leaders gathered in Ken-Ton on Friday to call for an end to the systemic underfunding of school districts by New York State which has cost Ken-Ton Schools nearly $150 million since the 2008-09 school year.

The New York State United Teachers (NYSUT) “Fund Our Future” campaign, led by NYSUT President Andy Pallotta, came to Holmes Elementary School and the Ken-Ton Closet on Friday, Feb. 7. Its goal is to raise awareness of the devastating impact cuts to New York State Aid have had on school districts like Ken-Ton.

The message to Gov. Andrew Cuomo and the New York State Legislature was that Ken-Ton has more than done its part; our schools cannot bear another year without the funding they’ve been promised; and it is long past time for Albany to meet its obligation and responsibility to adequately fund its public schools.

New York State has fallen far short of its commitment and obligation to school districts across the state. Since the 2008-09 school year, Ken-Ton Schools have been deprived of approximately $148 million in New York State Aid, and the consequences have been significant.

During that time period, the Ken-Ton School District was forced to close 30 percent of its school buildings – a total of four schools, including Jefferson Elementary, Hamilton Elementary, Roosevelt Elementary and Kenmore Middle School. It has also had to lay off scores of teachers and support staff and make significant cuts to student programming including foreign language education, computer education, and modified sports.

Despite these and other cost-saving measures along with concessions from the district’s bargaining units that helped the district survive this challenging period without further layoffs and cutbacks, the responsibility of funding public schools has continued to shift from New York State to local property taxpayers.

Meanwhile, this state funding, which should have been used to benefit students and schools in communities like Ken-Ton, has been shifted to other areas of the New York State budget or other parts of the state.

Despite years of advocacy, this grim fiscal reality only seems to be getting worse. A close analysis of Gov. Cuomo’s most recent budget proposal has revealed that it would include a paltry 0.59 percent increase in state aid for Ken-Ton Schools. This doesn’t come close to keeping pace with inflation, let alone rapidly escalating costs such as health care and retirement.

In January, NYSUT launched a statewide initiative, the seven-week “Fund Our Future” statewide bus tour, to raise awareness of the devastating impact inadequate state aid allocations are having on communities like Ken-Ton.

Jefferson Elementary was an ideal location for the discussion over why more funding is needed in communities like Ken-Ton, where more than half of students are categorized as economically disadvantaged. For one thing, Jefferson Elementary was the first of four schools to close as the fiscal reality in Ken-Ton worsened and New York State began significantly cutting state aid to school districts. It is also now home to one of the Ken-Ton community’s greatest successes: the Ken-Ton Closet.

The Ken-Ton Closet was founded by Dr. O’Malley, a district parent and SUNY Erie professor who, prior to her tenure on the Board, was a tireless advocate for Ken-Ton students. Dr. O’Malley founded the Ken-Ton Closet to serve the increasing percentage of economically disadvantaged students in the district. The Ken-Ton Closet, which continues to grow each year and has received statewide attention, provides free clothing, school supplies, and other everyday necessities to hundreds of children each year in the Ken-Ton community.

Over the summer, the Ken-Ton Closet moved from its old location and brought new life to the Jefferson Elementary building and now occupies an entire wing on the second floor of the building.

Many districts have had to continue cutting programs, services, and staff as ever-increasing New York State revenue continues to shift from public education to other areas of the state and budget.

The Ken-Ton visit came four days after the Ken-Ton School District’s first budget work session, which kicked off the 2020-21 budget development process. Even without any increases in programming or staffing, the district is facing a $5.9 million increase in expenses in 2020-21, including a projected 8.5 percent increase in health insurance expenses and 9 percent increase in retirement costs. With the paltry increase in Foundation Aid, the primary source of state aid revenue for school districts, and the limitations of the property tax cap, the district is beginning this budget development process with a $4 million budget deficit. Video of the meeting can be found here.

“The combination of the Foundation Aid not being fully funded along with the Governor's recent budget proposals continues to put a severe strain on our district's ability to raise revenue,” Bovino said. “While our community wholeheartedly supports the school district, we cannot place any further burden on our tax payers.”

Exacerbating the challenges of the tax cap and cuts to state aid was the recent closure of the Huntley Generating Station, which had contributed millions of dollars in revenue each year to the Ken-Ton School District.

Facing the inevitable closure of the aging coal-fired power plant, the Kenmore Teachers Association secured a NYSUT Solidarity Grant to help forge a grassroots engagement campaign with the WNY Area Labor Federation and Clean Air Coalition. They successfully advocated for the creation of the Electric Generation Facility Cessation Mitigation Fund, which temporarily offset some of that loss.

Now, the KTA, KTSEA, Ken-Ton School District, and Board of Education with help from NYSUT and local officials and representatives are joining together to advocate on behalf of Ken-Ton Schools and students and ensure that New York State meets its obligation and responsibility to fund our community’s schools.

“Our children do not get a do-over,” says Pallotta, who is visiting schools and communities in every corner of New York State. “We hear every year that there is a budget gap, but the state can’t close it on the backs of middle-class families and students through more underfunding of our education system. Fully funding our students’ futures can’t wait any longer.”