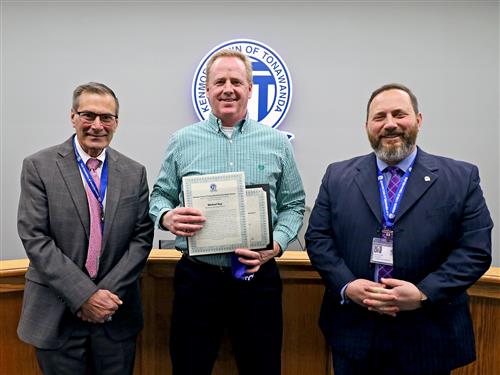 Michael Roy started his career in Ken-Ton working as a 12:1:1 teacher at Kenmore Middle school after graduating from Buff State in 1992. Over the next four years, Mike bounced back and forth between Ken-East and Ken-West. In 1997, they had the great fortune of having him land in his current teaching position in the 15:1 Work-Study program where he has been teaching for the last 25 years. During his time in the district Mike coached Boys Volleyball at the modified, JV and varsity levels at Kenmore West for 10 years. He was the head coach/coordinator for the Kenmore Special Olympics track team for 10 years from 2008 to 2018. Many students enjoyed doing the Special Olympics because of him. He always made it fun and rewarding for the athletes and families. In addition to the numerous valuable work experiences Mike coordinates for his students, he also implemented the building-wide recycling program at Kenmore East in 2010. Mike Roy has been an invaluable educator, colleague, mentor and friend to his students and the teaching profession. His well-earned retirement marks the end of an era and will leave a very large pair of shoes to fill. Mike’s singular dedication to his students reflects great credit on himself and is in keeping with the highest traditions of Kenmore East High School and the Ken-Ton community. We do not say lightly how much he will be missed.