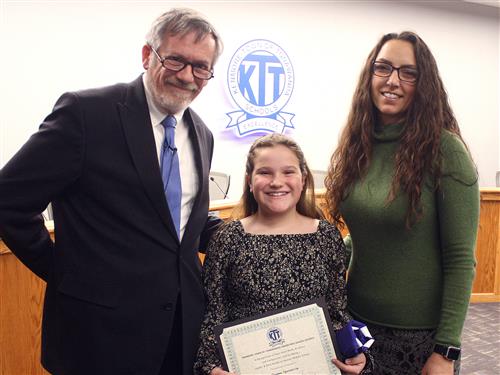 Hoover Middle Sixth grader Gianna Sperrazza is everything you would want to see in a middle school student! Aside from soaring academically - Gianna earned an academic average of 98.67 in the first quarter - she is kind, compassionate and extremely hard working. Gianna is a friend to all students and is looked upon as a leader and a role model. A participant in our Enrichment Program, Gianna also applies herself as a member of Science Fair Club, where she consistently comes prepared and presents high quality work. Gianna is involved in the school musical, Student Council, where she serves as Treasurer, and performs in both the Chorus and Band. She is a valuable member of our school community as well as her neighborhood community. When we shared the news of this recognition with her Mom, she said of Gianna, "The way she is here (at school) is exactly the way she is at home." We are so proud of Gianna! Congratulations.