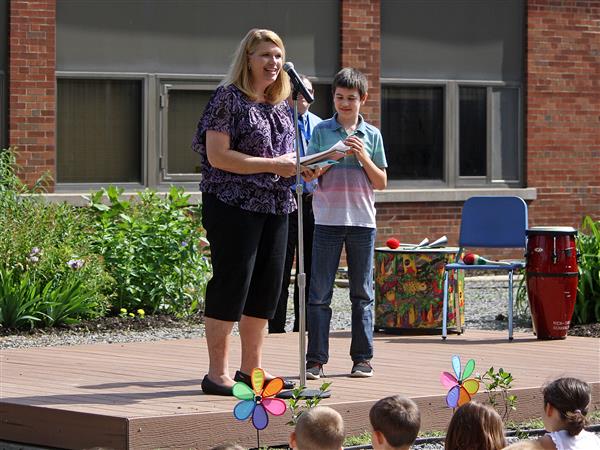 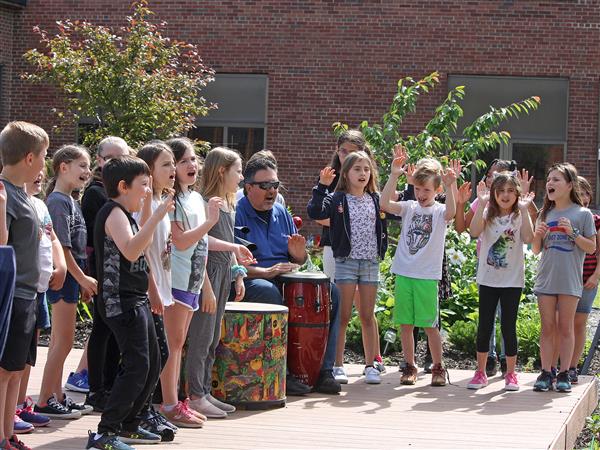 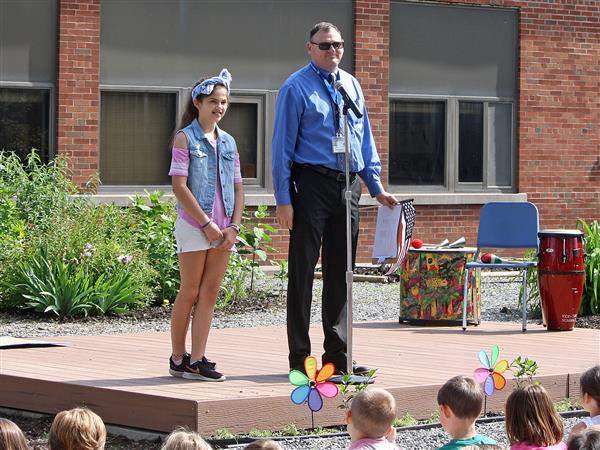 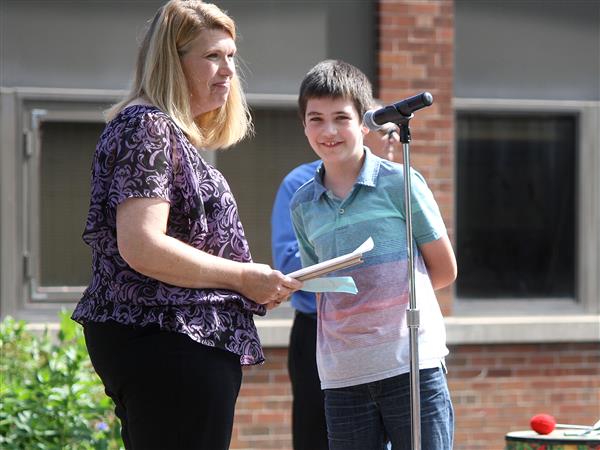 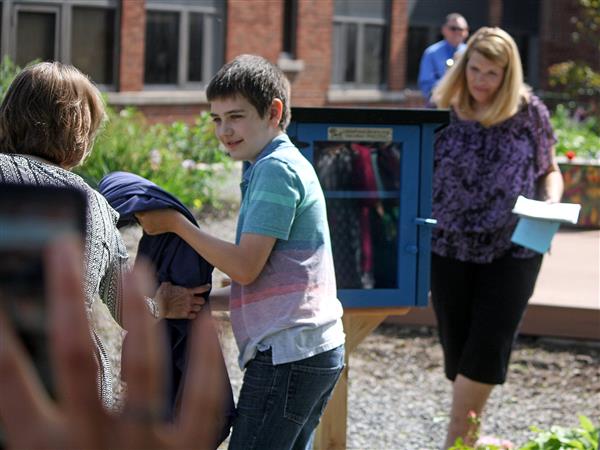 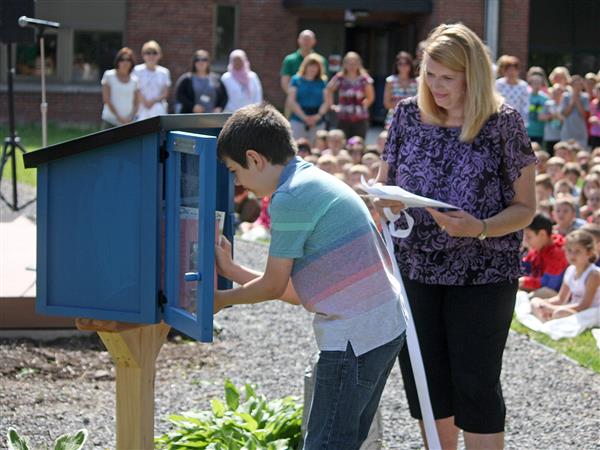 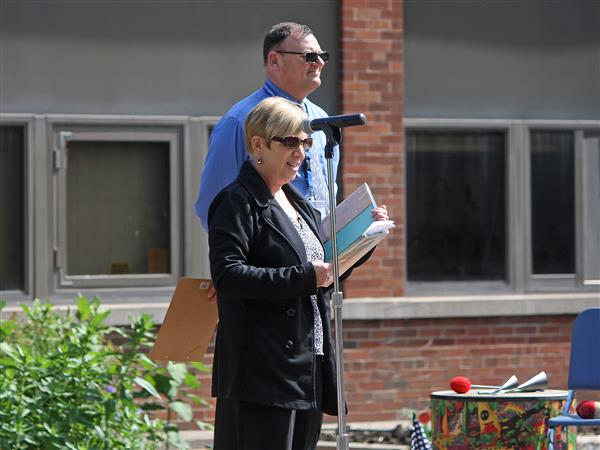 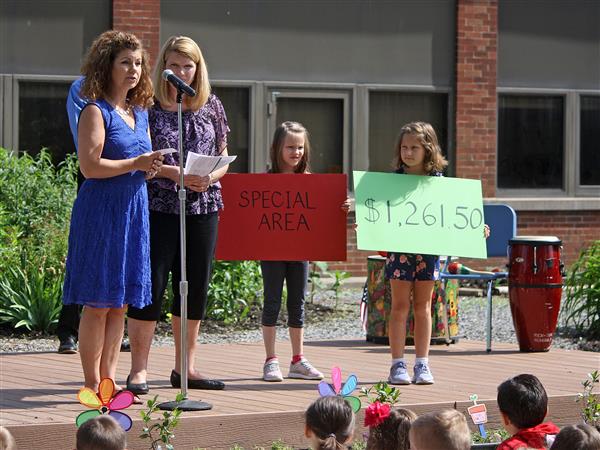 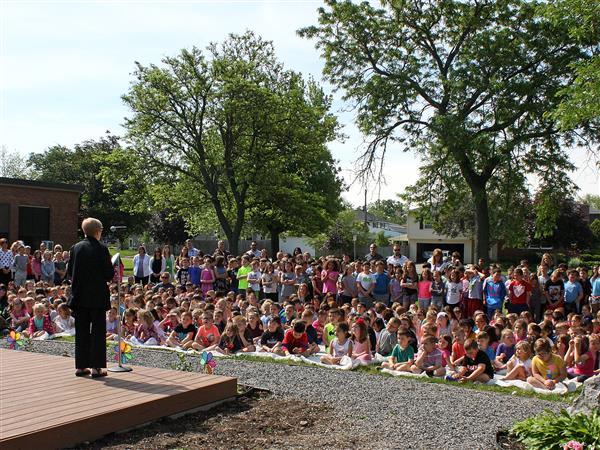 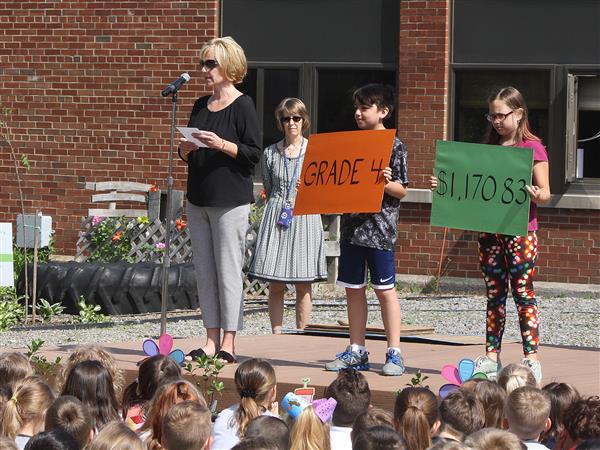 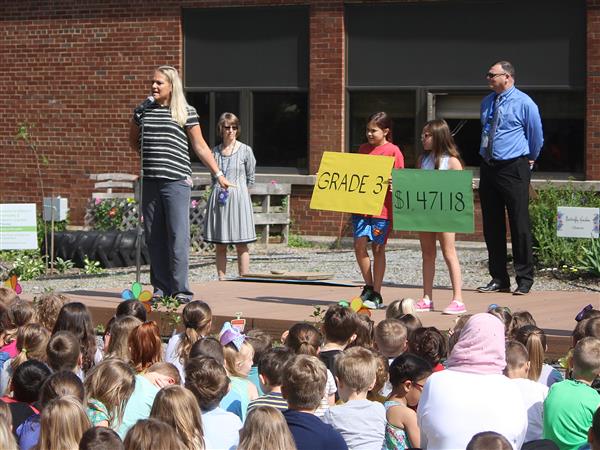 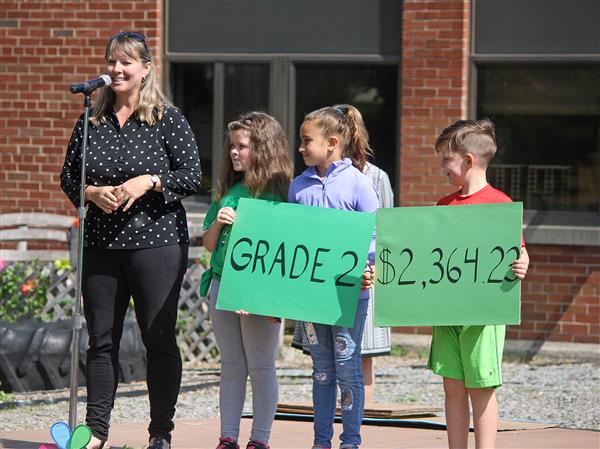 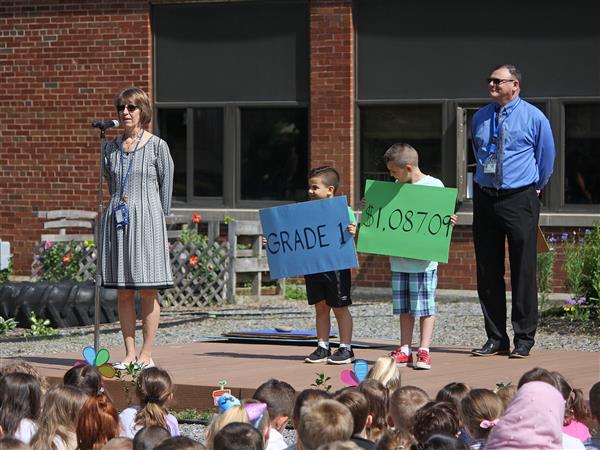 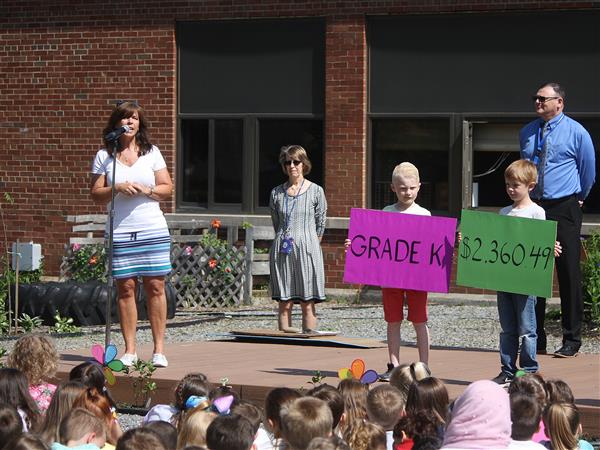 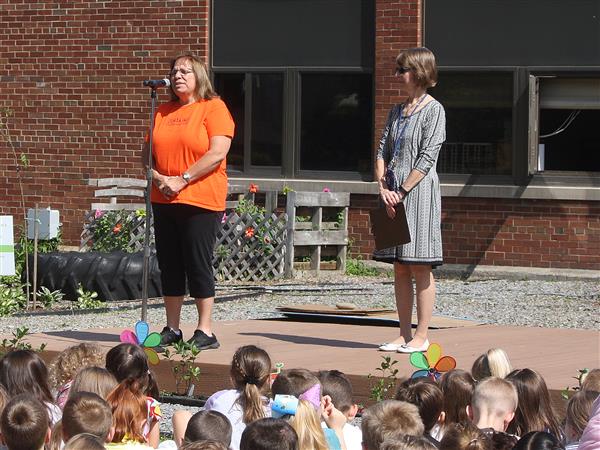 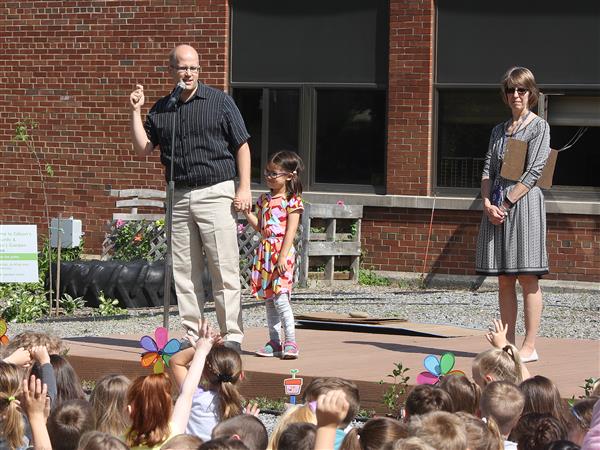 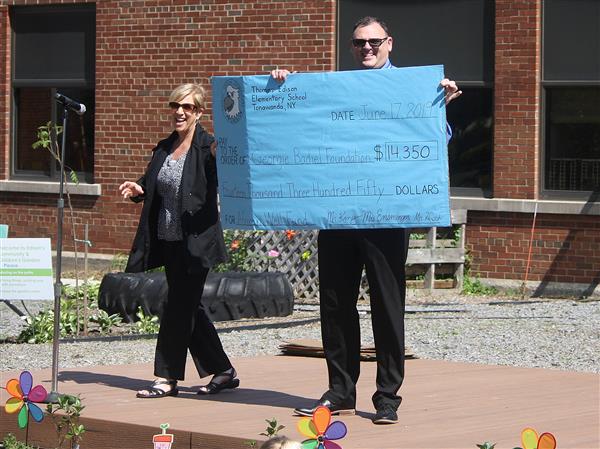 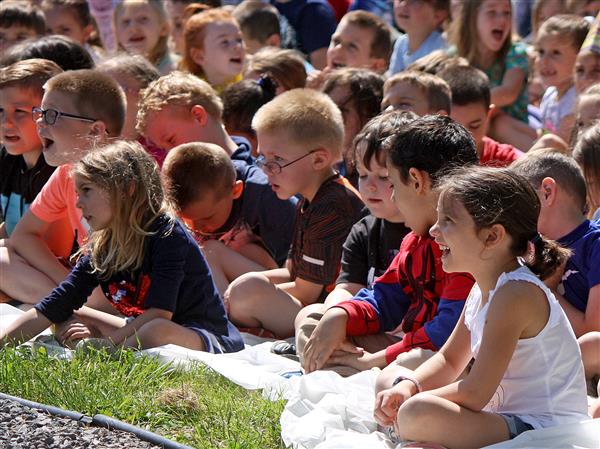 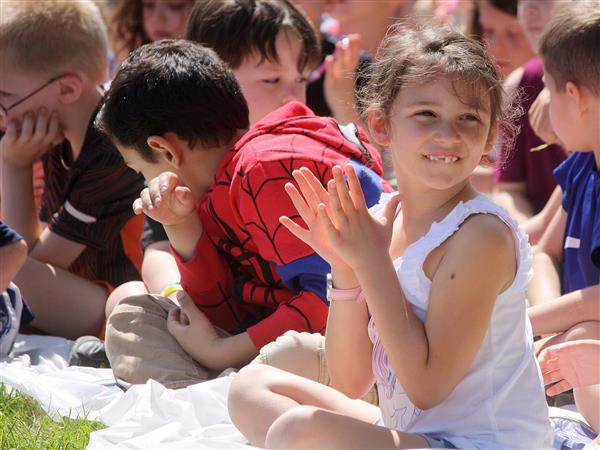 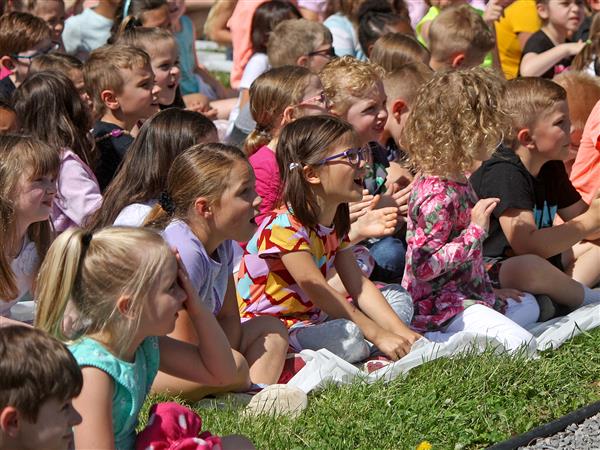 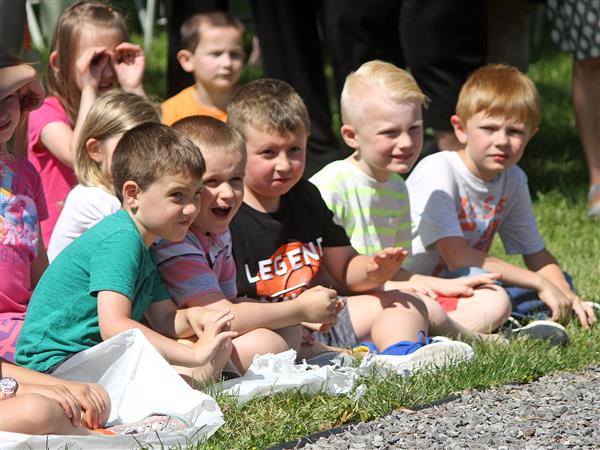 June 17 was a very special day at Edison Elementary School as students and staff gathered together to celebrate the achievement of a school-wide initiative to raise enough money to build a water well in a village in Africa.

On a sunny Monday morning outside the school’s beautiful new Children’s Garden, the students learned for the first time what the grand total was: $14,450 for the Georgie Badiel Foundation which is dedicated to bringing clean drinking water to the people of Burkina Faso and neighboring sub-Saharan nations.

Their effort began in the fall with a reading of “The Water Princess” by author Susan Verde and illustrator Peter H. Reynolds. The story, which was read in second-grade classes, is about a girl in an African village named Gie Gie. She must wake up early each day and spend much of her day walking a long distance to fetch drinking water from a far-off well. Because of this, she cannot attend school. The book is based on the true story of model and activist Georgie Badiel, who created the Georgie Badiel Foundation.

On Nov. 8, Verde paid a special visit to the school and spoke to classes about her work and inspiration. One topic was “The Water Princess,” the real-life childhood experiences of Georgie Badiel, and the work of Badiel’s foundation. The work of Verde and Badiel showed the students the everyday struggles of people in African nations who do not have access to clean water, and the difference a water well can make.

“A great children's book is meant to inspire, bring hope, shift thinking, and create a love of reading,” said school library media specialist Patricia Ensminger, who spearheaded the fundraising initiative. “ ‘The Water Princess’ by Susan Verde has definitely touched our heart and soul here at Edison Elementary. Susan's visit to our school last November brought us not only the words from the book, but also a connection to Georgie Badiel.”

The students wanted to help, and the staff researched the foundation before deciding to begin collecting money for Badiel’s foundation. It started out small: just loose change in hopes of raising up to $500, which would be enough to restore and repair a broken water well. But a core group of staff including Ensminger, art teacher Wendy Yiengst, first-grade teacher Susan Hirsch, and second-grade teacher Risa Klee thought a goal of $10,000, enough to build a brand new water well, might be possible.

On Friday, Jan. 11, the entire school gathered together in the gymnasium and auditorium where they had the opportunity to meet the real-life Georgie Badiel via Google Call and take part in a school-wide reading of “The Water Princess.” Bringing a water well to an African village had become a school-wide effort, embraced by students and staff alike.

Each grade level and special area classes such as art and music brainstormed different ways to raise money for the effort. Examples included raising money from pajama days, school events such as concerts and performances, a special painting event, construction paper water droplets to decorate the hallways, bottle and can recycling deposits, a walk-a-thon, competitions to see which class could accumulate the most loose change, and personalized bricks for the Children’s Garden. The school also received donations from individuals in the community, as much as $1,000 for the effort.

Each Tuesday morning during announcements, the students and staff would hear the updated total. But it wasn’t until June 17 that they learned the grand total was $14,450, enough to build a water well and repair and restore several broken ones.

At the event on June 17, representatives of each grade level and special areas such as art and music took to the stage to announce how much each had raised during the year. They were joined by special guests including Jeanne Phillips of the Zonta Club of Kenmore, which donated $500, and Ryan Gleason, father of a kindergarten student who donated $1,000. They were also celebrating the first-ever school-wide event in the Edison Children’s Garden, which was recently completed and dedicated to the late Jill Tomsic, a former PTA president, and the completion of a brand new addition to the garden – a Little Free Library spearheaded by student Logan Almond with help from the Rotary Club of Kenmore.

This wasn’t the only charitable effort at Edison Elementary during the school year. This year alone, the Edison community collected and donated pajamas for Haven House, children’s clothing items for the Ken-Ton Closet, money in support of the Rotary's effort to eradicate polio, hats and mittens for families in need in the community, coloring materials as part of a district-wide effort for Oishei Children's Hospital, canned goods and other food items during the holiday season, and Valentine's Day cards for veterans in the community. But knowing that, thanks to their efforts, children elsewhere in the world would soon have access to clean drinking water – something they could not imagine living without – made this very special for the Edison Elementary community.

It was a very powerful lesson for the students in many different ways: what they could accomplish as a community and working together as a team; how they can each make a difference in the world; the power of literature; and all they have to be grateful for that many others must live without, such as plentiful clean drinking water.

“I am so overwhelmed that we accomplished this goal, and thankful to all who participated,” Ensminger said. “But I am most thrilled that our little community is saving lives and giving something so simple – water to children who are thirsty – all because of the words in a book.”